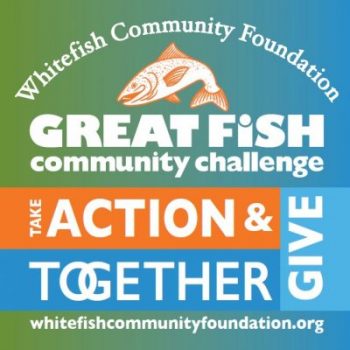 Donors gave generously throughout the campaign during the 6th annual Great Fish Community Challenge organized by the Whitefish Community Foundation. The 2020 campaign concluded on September 18th at 5:00 p.m. with a preliminary total of $2,732,961 raised over the seven week Challenge.

56 nonprofits participated in the 2020 Challenge, raising more than $461,961 over last year’s total at the 5 o’clock bell. A total of $173,445 was donated on the last day. The preliminary total is not the final and does not include the percentage match that will be awarded by the Whitefish Community Foundation.

Most of the participating charities raised more than $20,000, which is the maximum amount eligible to be matched, with a few charities raising over $100,000 through the campaign. “We expect more gifts to come in after the close of the campaign, said Linda Engh-Grady, Foundation president. “We usually get employee matching gifts and late donations after the campaign is over. All of these gifts will be passed on to the designated charities, but they are not counted in the match,” she said.

The match percentage is calculated by the Whitefish Community Foundation and will be unveiled during the Great Fish Community Challenge Awards Celebration on October 26th. The match percentage is made up of the gifts that are directed straight to the Great Fish Match Fund during the campaign, totaling $86,559 this year, and funds allocated from the Circle of Giving program. Last year, the total match award was $485,000, a 49% match.

The Great Fish Community Challenge Awards Celebration will be held virtually this year, broadcast to the public as a Watch Party on the Whitefish Community Foundation’s YouTube channel, Monday, October 26th at 6 p.m.

Several special awards will be announced during the watch party including the Great Fish Award, which comes with a $7,500 grant. The Great Fish Award recognizes a nonprofit for the impact it makes on the community and the depth of the organization’s participation in the 2020 Challenge.

Other special awards including the Jean Howard Memorial Award, Russ and Mary Jane Street Community Service Award, and Doris Schumm Community Spirit Award, will also be announced. New this year, several nonprofits will receive an additional $500 for the 200 Club for achieving 200 unique donors during the campaign. In addition to the match, more than $40,000 in special awards and incentive grants will be awarded through the 2020 Challenge from the Whitefish Community Foundation.